This is a short tutorial on how to make night-time photos like this one: 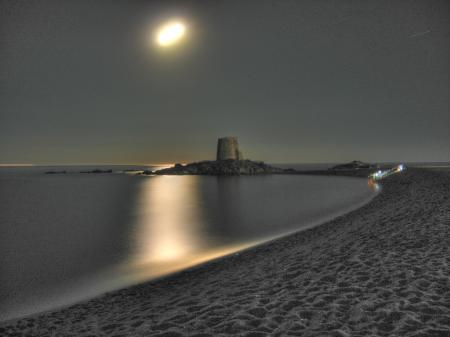 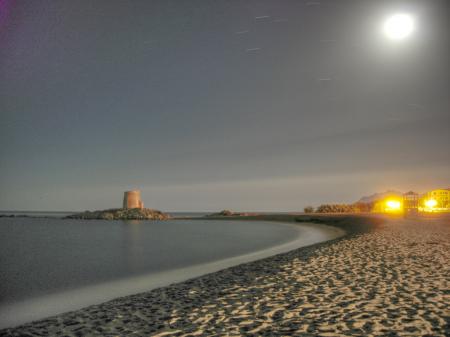 This image was obtained with a simple point-and-shoot camera like the Powershot A570 IS, empowered by the CHDK software and with a combination of  image stacking and HDR Tonemapping.

With the aid of a tripod and of a simple intervalometer script, I shot 40 photos with a 10" exposure each. The shots were taken at ISO 100 to reduce noise. Another shot was taken with identical parameters but covering the lens with a cloth, to have a dark frame also used to reduce noise. 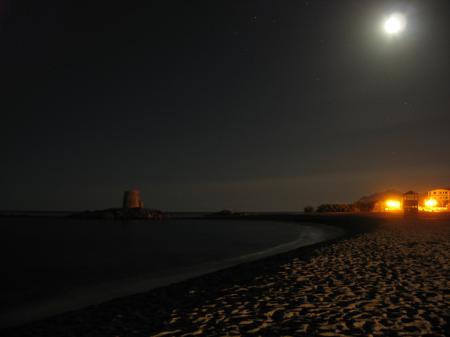 As you can see, everything is very under-exposed. One could try to correct the image using "Levels", but two prolems would arise:

If you try to give enough light to the sea, you get a lot of noise and a strongly overexposed area on the right: 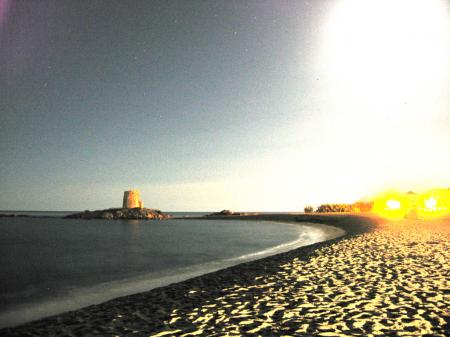 If you keep the image darker, the sea stays almost black: 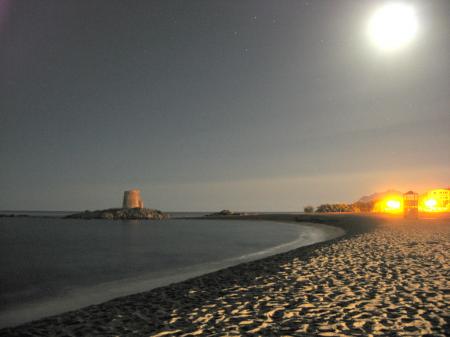 This is not bad, but not the result I wanted. I wanted stronger colors and to see the reflection of the tower in the sea.

I then used a program called ImageStacker to "stack" all the images together (there are other programs that do this, but ImageStacker is one is the one I prefer)

Basically, stacking is an operation of adding a lots of images together, pixel by pixel. This can be used to obtain two different results:
1) adding all the pixels, you get an image similar to the one you would obtain with an extremely long exposure.
2) averaging all the pixels, you get an image with an identical exposure but where (hopefully) most of the noise gets averaged out.

This is the image obtained with the "average" method: 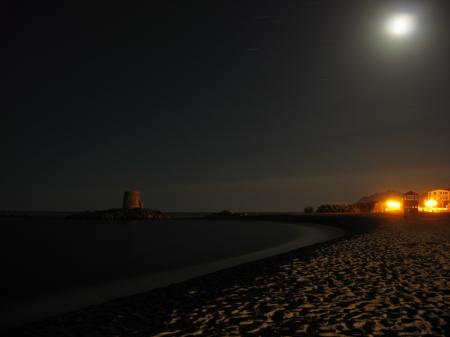 This image is as dark as the original was, but at least we can do levels without suffering because of all that noise: 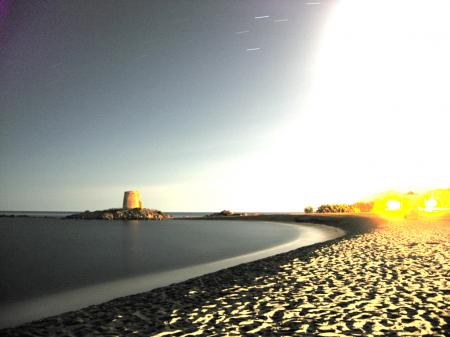 This is instead the image obtained using the "add" method:

Let\\\'s suppose we have 10 photos, and that the same pixel has this values in each photo:

we could think that this values represent a luminosity that is slightly more than 3 but less than 4.

If we average these photos, the result will be:

and we lose this additional information

If we just sum the images we will have the following result:

and we could hope that this 34 has kept some information about that dark pixel.

The problem is that if a pixel was very bright (about 150, for example) then we would have some values like these:

The average would be:

The sum would instead be:

because 255 is the maximum value!

To put it short, average is good for bright areas, while adding id good for dark areas.

The idea is then to use both two images to make an HDR: the average for the bright areas and the sum for dark areas.

Actually, ImageStacker also allows to generate images that are a mix between average and add. I did a mix with a divisor of 4, meaning that with my 40 images I had: 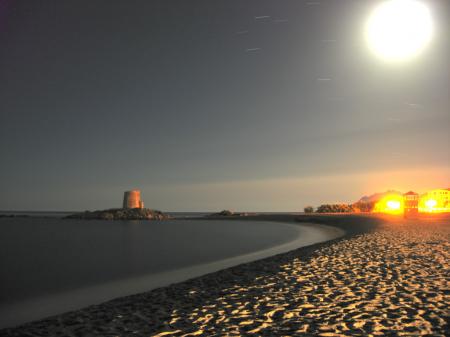 As you can expect, the mix4 image is an itnermediate between the average and the plain sum.

Using the "average" and the "mix4" image an HDR was generated (I used Photomatix) and after tonemapping, the final image shown above was obtained:

Sure, the "aesthetical" results can be discussed (and are far from optimal, in my opinion), and the look is completely un-natural for a night shot, but  I think that the technique is interesting and is very useful in very high-contrast situations (like often night shots are) where you want to keep information across strongly lighted and dark areas.

In this case, the strong moon reflection made the things particularly difficoult as the contrast between light and dark was very strong. Also I had to keep the exposure very short to avoid over-exposing the reflection. 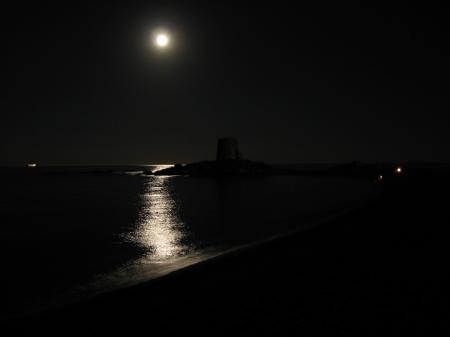 On these images, trying to do levels gives very bad results, with a lot of noise: 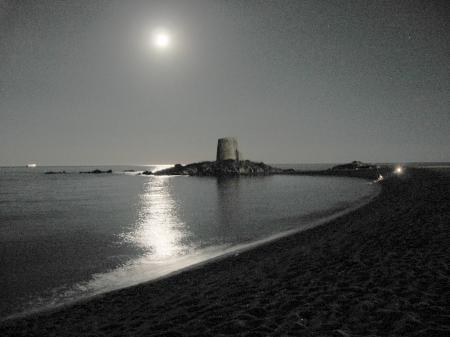 The averaged image as always is rather dark: 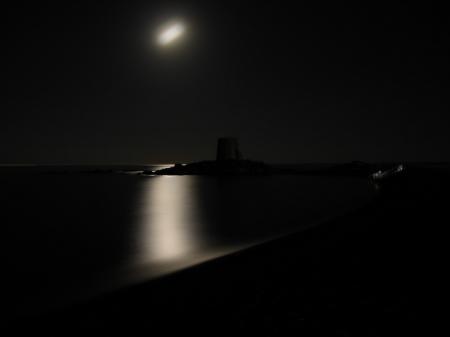 And doing "Levels" on this image gives very strong artifacts (as in the example above, luminosity changes from 3 to 4 in discrete, visible steps) 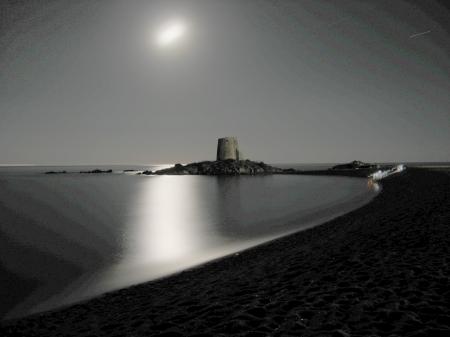 The summed image is extremely over-exposed: 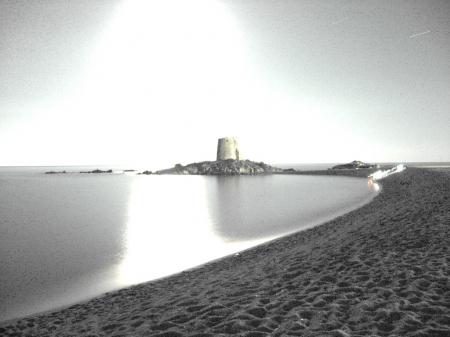 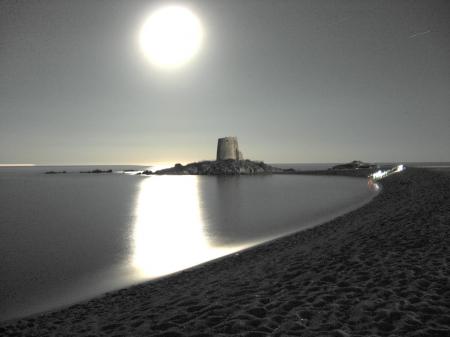 After tonemapping, the final result was obtained, with surprisingly good colours, given the difficoult conditions.

Some backstage material: my a570 on a tripod, running CHDK and capturing the shots from a good vantage point: 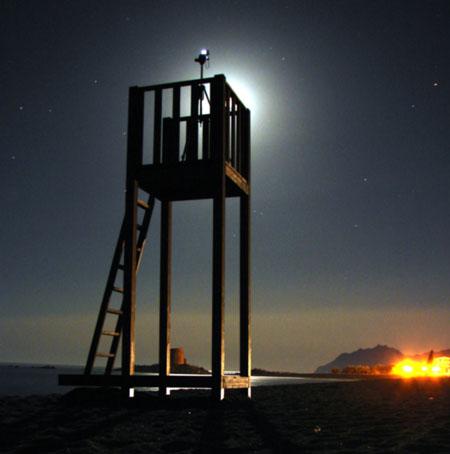 The location of both pictures is the Tower of Barisardo, in Sardinia, Italy.